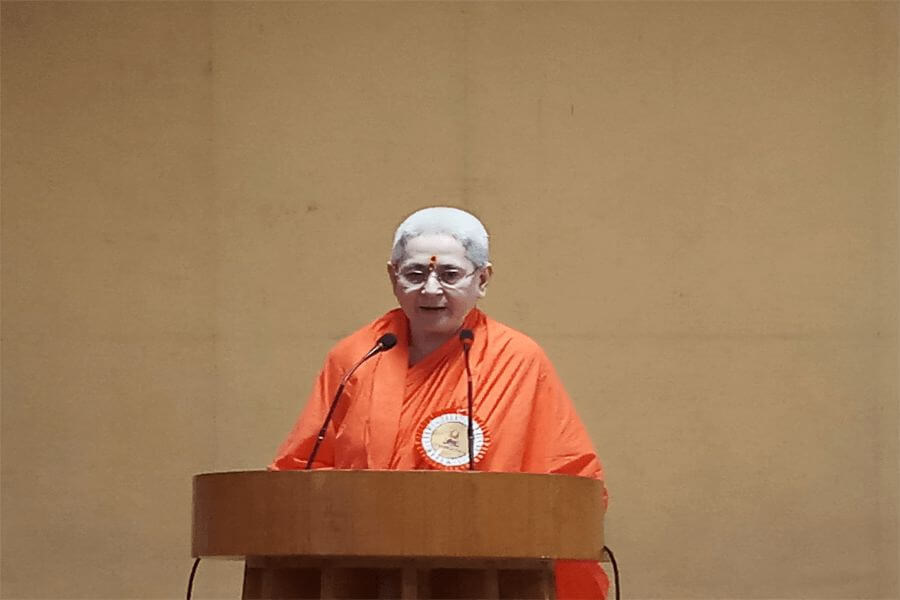 Swamini Sadvidyananda Sarswati is a disciple of Pujya Swami Dayananda Sarswati, (1930 to 2015) a great exponent of Vedanta and Hindu scriptures. She teaches the great truth content in Bhagavad Gita and Upanishads in simple language that can be understood by a lay person, who has desire to know the truth of life. She is also scholar in Sanskrit and hence has direct excess to original scriptures. She has studied Vedanta and Sanskrit for more than a decade with His Holiness Swami Dayananda Sarswati in ancient Gurukulam system of learning. Her compassion for the afflicted and her simple life-style makes her a Mahatma of common people. She is fluent in English, Gujarati and Hindi.

She entered in spiritual life with the background of very religious and sacred family with knowledge seeking mind. From year 1981 to 1988 she studied Vedanta in Surat, Gujarat under Swami Pratygbodhanandaji, the disciple of Pujya Swamiji Dayanandaji. In 1983 she had an opportunity to
meet Pujya Swamiji Dayanandaji first time in Vadodara. In between whenever there were opportunities she also studied Vedanta and atten

From last 25 years she is spreading this knowledge of Bhagavad Gita and Upanishads in Gujarati in different towns of Gujarat like, Navasari, Bardoli, Valsad, Bilimora, Vyara and Bhavnagar. She is also
visiting schools in those towns and surrounding tribal areas to educate the students of the schools.

From 2003 to 2013 she travelled abroad extensively for lecture tours in other countries such as different cities of USA, Canada and New Zealand. She had also organized the three days children camps in few cities of USA.

She was invited by the Acharya of Swami Dayananda Ashram, Rishikesh to teach Vedanta and Panini Grammer for three years course students from March to October 2018. In November 2018 she also tought Yoga-darshan by Muni Patanjali in the three Yoga camps by Sri Nandakumar and Rakesh
Upadhyay in Rishikesh Ashram.

Under the banner of her Trust – Arsha Vidya Tirhta, Navsari she has translated and published more than 37 small books of her Revered Guru Swami Dayananda Saraswatiji into Gujarati. The trust had sponsered and published the book on Ayurveda, an Ancient system of medicine. She has recently written and published a detailed book on Yoga based on the ancient commentries.

And from 1998 to 2003 she also translated voluminous book of 2000 A4 pages on Bhagavad Gita “Gita Home Study” into Gujarati in 26 volumes for the benefit of those who can understand it better in one’s own mother-language. The second print of the same was in 14 volumes (2005 to 2009) and now the third print of the same book is available in 9 hard bound volumes.

Her all the classes of Gita, Upanishad, Primary books on Vedanata, Bhagvata-Puranam in Gujarati are recorded and now classes are available in mp3 format for the benefit of the sincere students who are
not able to attend the classes in person.

Since 2011 she is preparing the table calendar based on various spiritual and cultural topics centered on Gita and Life of Lord Krishna. Since corporate world is often seen disconnected with spirituality, she has successfully worked on an opportunity where a corporate group publishes annual data calendar. Here using different spiritual themes one relates to business world protrating values, ethics and principles that inspire business to be socially focused. Using a central theme such as Value based Managment, Personal Re-organizasion, Yajna - The Worshipful lifestyle, Successful Living, Yoga-Darshana, From Consumer to Contributor, Multiple Role Playing, Global Family and Harmony, etc. One can use
monthwise storey theme across the month of the year. The same is later converted into “Corporate Study Class” where senior directors and managers attend to learn business values and application from
spirituality.

Thus she is constantly active to teach and to spread the profound knowledge of Vedic vision and Culture, and Vedanta to the seekers in simple Gujarati language but with depth and also in English and Hindi in Abroad. She is regularly visiting tribal areas of Ahwa-Dang, Navsari and Dharampur, Valsad in South Gujarat for education and welfare of the tribal children and adults.